Kenny James is also a producer under the moniker, "Invisiblemann," creating music with rock, pop, jazz, soul and R&B musicians from around the globe by building songs collaboratively online. This project allows Kenny to often record parts on bass as well as drums and keyboards, with artists such as jazz songstress Taeko Fukao, soul R&B singer Maya Shavonne (lead singer with Donald Byrd and the Black Byrd’s) and Taiwanese-Idol runner-up, pop singer, Kimmy Chin. Hear excerpts from 2 songs off Volume 9, or hear all songs from his 3 CD collections on his main site.
InvisibleMann 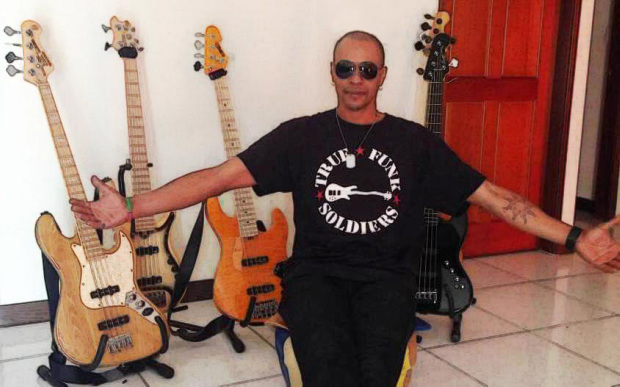 The sixteen tracks on Invisiblemann Vol 9 Global Funktion fuse many genres, but are connected by sexy, down-tempo beats and soulful female vocals. On the romantic R&B ballad "Gliding Away" and the psychedelic, ambient track "Deep Inside," James' groovy bass lines add depth to the melodies. Indian percussion meets gritty blues on "Get Down By Myself," whose crisp sampling and experimentation make it one of the album's standouts.
–Whitney Phaneuf, East Bay Express review

Kenny is also bassist and band leader of True Funk Soldiers, a funk cover band that played to rave reviews while headquartered in Oakland. Now in Taiwan, the band is a mix of young, super skilled Taiwanese musicians along with some highly talented American musicians. Hear the Funk at link below.
True Funk Soldiers
Kenny James joined the Plugged Music Group in 1996 and worked with Jim Colao on numerous spots, network promos, and industrials for clients like Levi Strauss Co., Ulta, Shonies Restaurants, Comedy Central, and MTV. His music is part of the soundtrack to an indie feature-length documentary, an excerpt of which can be viewed on our "Documentary Scores" page.

Kenny is a natural bass player in virtually all styles of music. His songwriting as Invisiblemann reveals his talent for playing solid funk grooves on drums and then adding the perfect bass line to fit the beats.